As we saw here, the stock market bottomed July 8, 1932 with a near triple conjunction of Venus, Ceres and Earth opposing Pluto and squaring Uranus.


It rose strongly for 34 years until January 7, 1966 when Uranus conjuncted Pluto opposing Saturn, and leveled off for more than a decade.


Then 21 years later was the 1987 crash, one of Cowan's Beast cycles. Neptune, Uranus and Saturn are in loose conjunction.


The SPX topped 13 years later on March 24, 2000, with a near triple conjunction of Jupiter, Saturn and Mars squaring Uranus, and double topped later that year in August.


Geocentric Saturn opposed Uranus 8 years later when the Nasdaq made its major low on November 21, 2008. The S&P and DOW bottomed in March, 2009.


Another 5 years brings us to the present time frame of late 2013 to early 2014, with Pluto opposing Jupiter squaring Uranus, discussed in detail here. A major market top is expected within this time frame.

Curiously, on January 7, 2014, Jupiter will be in near triple conjunction with Earth and Venus, opposing Pluto and square Uranus, an almost perfect mirror of the July 8, 1932 configuration shown above, with Jupiter substituting for Ceres. Breaking a mirror is 7 years bad luck! 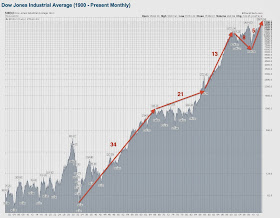 A completion of the Fibonacci sequence, 3, 2, 1, 1, brings us to late 2020/early 2021. On December 21, 2020, Jupiter will conjunct Saturn geocentrically, squaring Uranus heliocentrically.

This date was first mentioned here in connection with the 2004 Sumatra and 2007 Peru mega quakes. I have been fascinated with this date for a long time and believe this or very close to it could be one of if not the most important turn date of our generation.
platy at 7:25 PM
Share